TORONTO, Nov. 25, 2020 – The Art Gallery of York University’s (AGYU) new, stand-alone art gallery, to be designed and constructed by winning architectural firm Hariri Pontarini Architects, will embrace a vision of art and connectedness.

The bold new winning design will help the art gallery magnify its reach into the local community and the world beyond, enhancing its visibility and prominence, as well as increasing its accessibility.

The new stand-alone art gallery is possible through a five-million-dollar donation in October 2019 by philanthropists and art collectors Joan and Martin Goldfarb, igniting this expansion and re-centering the arts on campus. The gallery will also carry their name, the Joan and Martin Goldfarb Gallery, in honour of their long history of supporting the arts at York University.

“The new, stand-alone art gallery at York University will be an important hub for artistic engagement and the pursuit of creative excellence at the University, in our community and beyond. The new design reflects our vision of an accessible and collaborative art gallery that serves as a space for creation, exhibition and appreciation of diverse art and culture. I would like to thank the Goldfarbs for their generosity and unfaltering commitment to the arts, which made this project possible,” says President & Vice-Chancellor Rhonda Lenton. 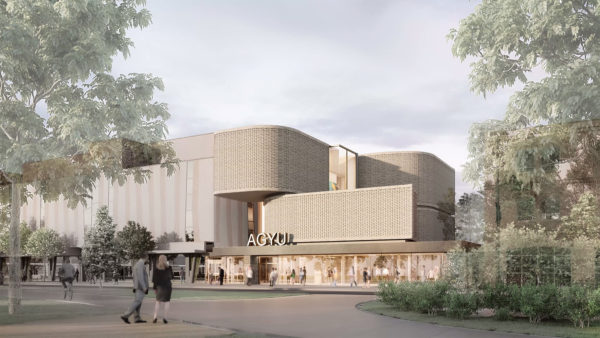 The new building will sit at the heart of the School of Arts, Media, Performance & Design and become a centerpiece at York’s Keele Campus. Just steps away from the York University subway station and adjacent to the Harry W. Arthurs Common, between the Accolade East Building and the Centre for Film & Theatre, the gallery will stand out as an icon with Hariri’s signature curves.

The three-storey building will highlight architectural innovativeness and define a space for the exhibition of contemporary and historic art, including a ground level event space with four separate gallery spaces set within a redefined xeriscape garden.

“The AGYU has a long history as a leader in presenting and supporting artists. As a contemporary art gallery, it strives to serve an aesthetic and social function,” says AGYU director/curator Jenifer Papararo. “Our goal with this ambitious new building is to establish both liveness and legacy by maintaining a critical contemporary art program and giving prominence to the University’s collection.”

The gallery will be a versatile yet distinctive space for a multiplicity of artistic voices and forms. It will also enhance the gallery’s ability to continue its advocacy of underrepresented communities, contribute to artistic production and help amplify artists’ voices.

“We are thrilled to be working with York University to build upon the AGYU’s rich history and help reimagine its future,” says Siamak Hariri, founding partner at Hariri Pontarini Architects. “To signify this transformation, we were inspired by metaphor and nature. Like a butterfly, each of the five wings of the new gallery extend their reach out to the campus and of course beyond. Responding to the AGYU’s aspiration to expand the social and civic role of the gallery, the building will have a powerful presence, a new presence, embracing the full University Common, and welcoming and attracting visitors to all the wonder it has to offer."

HPA’s design, led by Hariri, was selected for its visual strength and magnetizing draw with a vision to generate flow and connection while centering the arts on campus. The design expressed a nuanced understanding of art, its role in society, and the framework needed to support art and the curatorial process.

HPA has worked with many Canadian universities and cultural organizations, most recently opening the Tom Patterson Theatre in Stratford, which has received high accolades. In addition, Hariri has received international praise for his design for the Bahá’í Temple of South America, which won several awards including the RAIC International Prize.

Moriyama and Teshima Architects and gh3* were also on the shortlist for their designs for the gallery. All three firms have received Governor General Medals in Architecture.

Combined with the AGYU’s current spaces, the new building will form a unified art institution that will magnify the breadth of the gallery’s scope, with a re-envisioning of the University’s art collection.

The art gallery’s collection currently contains 1,700 works, including a donation by the Goldfarbs of 76 artworks in the early 2000s. It includes prominent donations of works by Norval Morrisseau and Andy Warhol, 200 prints and sculptures by renowned and influential Inuit artists including Kenojuak Ashevek and Kananginak Pootoogook, as well as paradigmatic work by Canadian “Automatistes” Jean-Paul Riopelle and Paul-Emile Borduas. American Modernists such as Helen Frankenthaler and Kenneth Noland are also part of the collection, as is the recent acquisition of RISE, an internationally acclaimed film by Bárbara Wagner and Benjamin de Burca, featuring performances from some of Toronto’s most influential spoken word and rap artists.