The findings were made by two independent groups of researchers, one based in Denmark, the other based in the United Kingdom and Canada. Both research groups set out to test whether airborne eDNA could be used to detect terrestrial animal species. To do this, the research teams collected air samples from two European zoos, Hamerton Zoo Park, UK, and Copenhagen Zoo, Denmark. 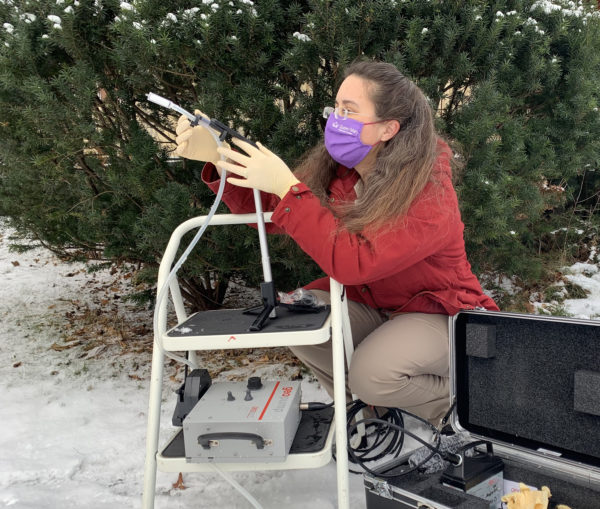 Each team used a different method of filtering airborne eDNA, but both succeeded in detecting the presence of numerous animal species within and beyond the confines of the two zoos.

Bohmann’s team collected air samples using three different air sampling devices; one commercial water-based vacuum and two blower fans with filters attached – the smallest one of these two was the size of a golf ball. They collected air samples in three locations: the okapi stable, the Rainforest House and outside between the outdoor enclosures.

Clare’s team used sensitive filters attached to vacuum pumps to collect more than 70 air samples from different locations around the zoo, both inside animal sleeping areas and outside in the general zoo environment.

The results from both studies exceeded their expectations.

“When we analyzed the collected samples, we were able to identify DNA from 25 different species of animals, such as tigers, lemurs and dingoes, 17 of which were known zoo species. We were even able to collect eDNA from animals that were hundreds of metres away from where we were testing without a significant drop in the concentration, and even from outside sealed buildings. The animals were inside, but their DNA was escaping,” says Clare.

“We were astonished when we saw the results,” says Bohmann. “In just 40 samples, we detected 49 species spanning mammal, bird, amphibian, reptile and fish. In the Rainforest House we even detected the guppies in the pond, the two-toed sloth and the boa. When sampling air in just one outdoor site, we detected many of the animals with access to an outdoor enclosure in that part of the zoo, for example kea, ostrich and rhino.”

Many of the detected species were kept at the zoos, but remarkably both teams also detected species from areas surrounding the zoo. The Eurasian hedgehog, endangered in the UK, was detected from outside of Hamerton Zoo, UK, while the water vole and red squirrel were detected around the Copenhagen Zoo. Both teams also picked up the presence of food items for zoo animals, such as chicken, cow, horse and fish. The wide range of detected species shows the potential that airborne eDNA could be used to detect and monitor terrestrial animal species in the wild. This would ultimately support global conservation efforts. 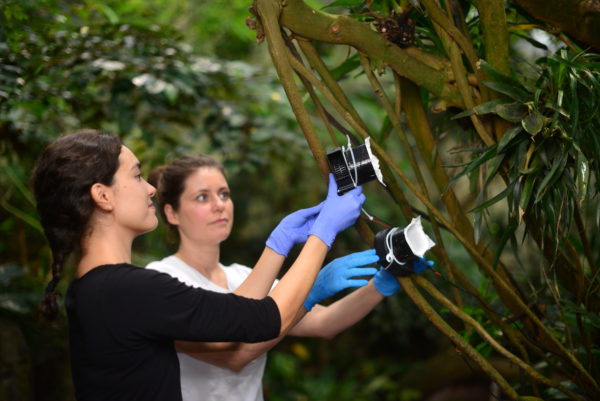 “The non-invasive nature of this approach makes it particularly valuable for observing vulnerable or endangered species as well as those in hard-to-reach environments, such as caves and burrows They do not have to be visible for us to know they are in the area if we can pick up traces of their DNA, literally out of thin air,” says Clare. “Air sampling could revolutionise terrestrial biomonitoring and provide new opportunities to track the composition of animal communities as well as detect invasion of non-native species.”

Living organisms shed DNA into their surrounding environments as they interact with them, and in recent years, eDNA has become an important tool for species detection in a wide range of habitats. For instance, eDNA analysis of water samples is routinely used to map species in aquatic environments. However, while air surrounds everything on land, it is only now that airborne eDNA has been explored for animal monitoring.

One of the main things when demonstrating a novel eDNA sample type is to ensure that results are reliable as eDNA analyses are very sensitive and prone to contamination.

“Air is a challenging substrate to work with as air surrounds everything, which means that contamination risk is high. We wanted to ensure that the species we detected were from the zoo and not for example from the lab. To ensure that we did not have any contaminant DNA floating in the air in the lab, we sampled air from within the lab and sequenced that too,” says Dr. Christina Lynggaard, who is part of the Danish team.

For these early studies, being able to replicate the work is key. The teams had no knowledge of each other’s work until the studies were completed but were thrilled by the parallel nature of the experiments. Clare and Bohmann agree that having two research teams independently demonstrate that airborne eDNA can be used to monitor a range of animal species greatly enhances the strength of their work and clearly show the potential of the technique.

“We did not think that vacuuming animal DNA from air would work,” Bohmann adds, “This was high risk, high reward science with the potential to push the boundaries of vertebrate biomonitoring. Clearly the sky is not the limit.”

The use of airborne eDNA sampling in natural environments will need further research to unlock its full potential, but both research teams believe it could transform the way researchers study and monitor animal biodiversity.

Both research papers, Measuring biodiversity from DNA in the air, led by Clare, and Airborne environmental DNA for terrestrial vertebrate community monitoring, led by Lynggaard, were published today in the journal Current Biology.

For more information or a copy of the article contact:

About University of Copenhagen

Driven by intellectual creativity and critical thinking since 1479, researchers and students at the University of Copenhagen have expanded horizons and contributed to moving the world forward. With its 5,000 researchers and 37,500 students, the University boasts an international research and study environment and is highly ranked on the leading ranking lists of the world's best universities. The University offers researchers and students the opportunity to develop their talent and launches ambitious interdisciplinary initiatives to support its strong academic communities. Through research-based teaching – and by involving them in research – students are equipped to address society's challenges and needs. The University of Copenhagen is working towards becoming one of the world’s greenest campus areas, leaving as little environmental and climate footprint as possible. The University facilitates cross-organisation collaboration, liaises with the business community and helps students find relevant programmes and projects in the field of sustainability. The University also focuses on gender equality and sees diversity as a strength.

About Queen Mary University of London

At Queen Mary University of London, we believe that a diversity of ideas helps us achieve the previously unthinkable. Throughout our history, we’ve fostered social justice and improved lives through academic excellence. And we continue to live and breathe this spirit today, not because it’s simply ‘the right thing to do’ but for what it helps us achieve and the intellectual brilliance it delivers. Our reformer heritage informs our conviction that great ideas can and should come from anywhere. It’s an approach that has brought results across the globe, from the communities of east London to the favelas of Rio de Janeiro. We continue to embrace diversity of thought and opinion in everything we do, in the belief that when views collide, disciplines interact, and perspectives intersect, truly original thought takes form.