TORONTO, March 22, 2022 - The world's ecological footprint, as measured by its use of natural resources, such as food, water, cropland, fisheries and fuel, has tripled since 1961. It has exceeded the Earth's biocapacity or ability to regenerate what's used, every year since 1971. 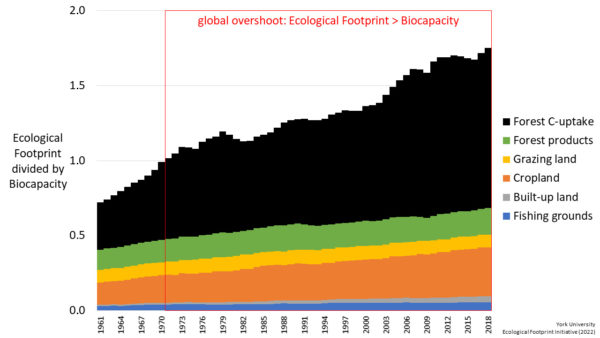 "Clearly, this is unsustainable. At this rate, humanity will feel an accelerating squeeze of the resources needed to feed and house us, among other things," says Eric Miller of York University's Faculty of Environmental and Urban Change and director of York's Ecological Footprint Initiative.

The initiative produces the ecological footprint and biocapacity accounts of all nations annually for the Footprint Data Foundation using international datasets. It measures how many resources each country uses compared to how quickly those resources can be regenerated, including carbon. It also details how much of the ecological footprint is within the national boundary for internal consumption versus export, and how much is embodied within imports. 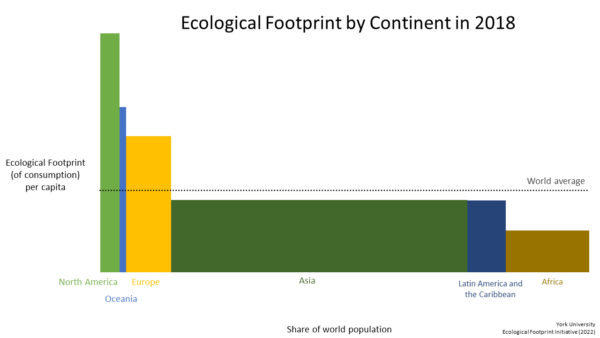 This year's accounts measured up to 2018, the last year for which data is available. At this point, although the current COVID-19 pandemic may have a short-lived positive ecological impact, it is still too early to know.

"Our work offers important lessons for humanity’s post-COVID health and economic recovery in the future as after every past crisis that reduced humanity’s ecological footprint, the world soon rebounded to growing its metabolism of fuels and sprawling its infrastructure," says Miller.

What is known, is that for 2018, the ecological footprint of humans was 75 per cent greater than biocapacity. "It would take the planet 21 months to provide the natural resources needed to sustain humanity for just 12 months," he says. 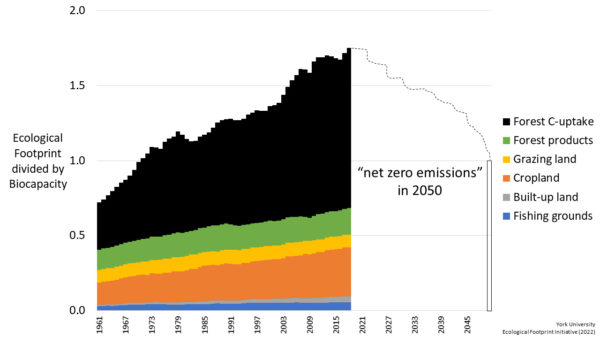 Canada is one of more than 120 countries committed to net-zero emissions by 2050. This goal could be achieved if all these countries reduce their ecological footprint to a level that could be sustained by nature. This would mean reducing the total ecological footprint to the level they had in 1970, as the world population is expected to grow by another 43 per cent by 2050. Every unit of carbon emitted in 2050 would need to be drawn down in that same year.

"Humanity would have to stop adding greenhouse gasses to the atmosphere. That's a monumental challenge," says Miller. "The genius of the footprint accounts is that we integrate the demand for carbon sequestration with other demands on the planet’s lands and waters." 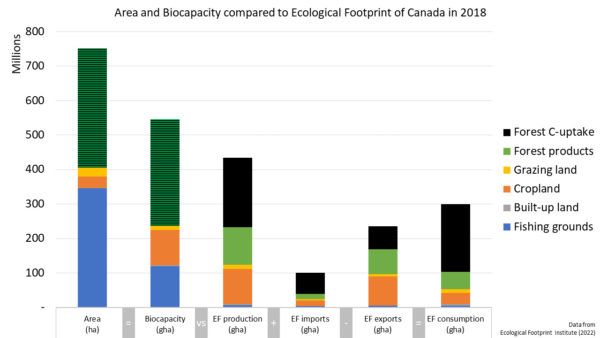 The conflict in Ukraine will have direct impacts on the rest of the world and will likely cause rising food costs and shortages, including Canada, as food supply chains are affected. More than half of Urkraine's ecological footprint was used to feed and fuel the rest of the world, which has now been disrupted.

Ukraine, like Canada, exports more resource intensive goods to the rest of the world than it imports. Canada's exported goods, such as crops, wood and paper products, are twice as resource intensive than its imports, such as entertainment, including Netflix shows, as well as patented software and drugs, creating a definite imbalance when measuring resource use. 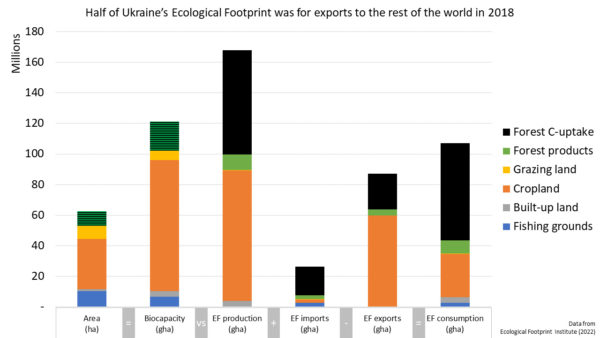 The goal of York's Ecological Footprint Initiative is to inform individuals, communities and government leaders so they can better manage limited resources, reduce economic risk, and improve well-being.

Data on a national and global basis are available at https://data.footprintnetwork.org/#/.