Potential survival benefit associated with size perception, particularly for those who work in unusual body postures

TORONTO, Dec. 16, 2021 – Researchers at York University’s Centre for Vision Research say new findings show lying on your back or stomach can change the way your brain perceives how close an object is. The study, published today in Perception, used virtual reality to conduct experiments where participants in standing or lying positions judged the size of a visual target projected at simulated distances of between two and 10 metres – comparing it to a physical reference length held in their hands.

Laurence Harris, professor, Faculty of Health at York University and senior author of the study Body Orientation Affects the Perceived Size of Objects, says there may be a survival benefit associated with how we perceive objects while lying down.

“We think that the findings might be connected to some sort of ecological advantage – that when you’re lying down you are more vulnerable to threats and seeing them as closer may help you react a bit quicker. It may be a kind of protective feature that we all have, said Harris.”

The study showed participants needed to make the visual size of a target 5.4 per cent larger when on their back and 10.1 per cent larger when on their stomach to perceive that it matched the physical reference length, compared to when they were in an upright position. Participants needed to assess if the object they were looking at was longer or shorter than the object they were holding in their hands. 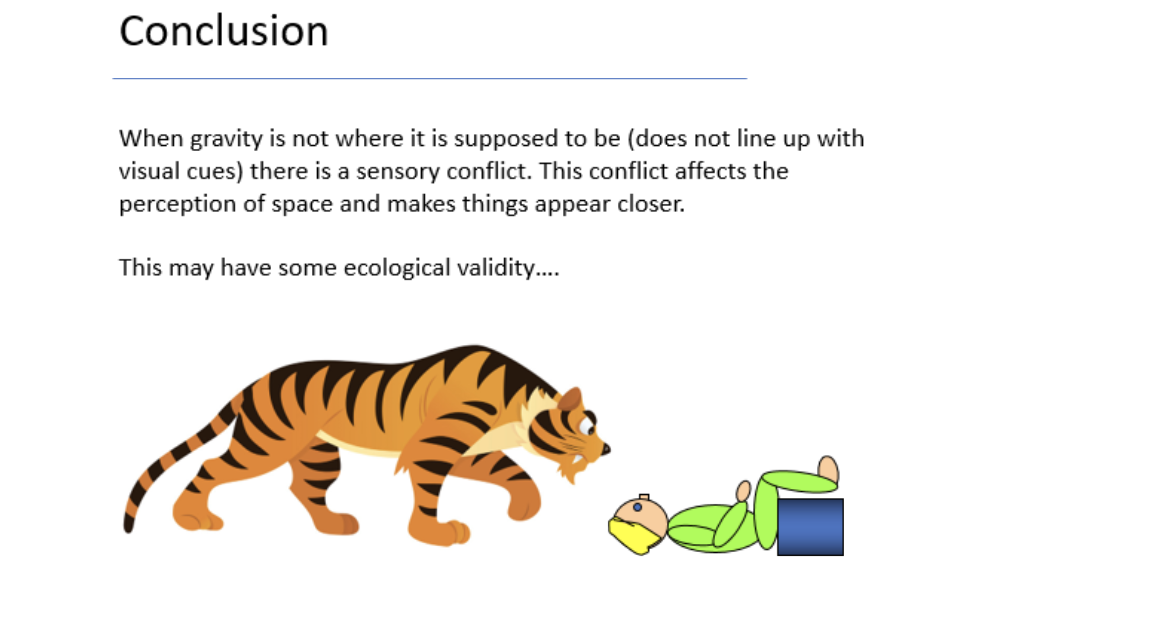 “We were expecting that because gravity is acting on our bodies in different directions between lying on one’s stomach and on one’s back that what we would find opposite results for each posture,” says John Kim, lead author and doctoral student in Harris’ lab. “When lying on your stomach, gravity is pulling you forward, but while on your back, gravity is pulling you backward. What was surprising was that underestimation of the distance to an object was found in both conditions. That tells us that the actual direction of gravity doesn’t seem to impact the perception of size of the object, just that gravity is not in its usual alignment with the body.”

Researchers say size perception is important in our daily lives. Any misperceived size can result in undesirable and potentially dangerous errors especially for those who work in unusual body postures.

“When you’re in space on the International Space Station for example, you’re weightless. Gravity is cancelled out on the space station and so knowing about the effects of gravity on your perception is important. When you’re reaching out to touch switches on a panel, knowing how far away things are can be very important – especially in an emergency. Alternatively, if you’re working underneath a car as a mechanic, estimates of distance may be slightly different as well, so knowing that is important, too,” said Harris.

York University is a modern, multi-campus, urban university located in Toronto, Ontario. Backed by a diverse group of students, faculty, staff, alumni and partners, we bring a uniquely global perspective to help solve societal challenges, drive positive change and prepare our students for success. York’s fully bilingual Glendon Campus is home to Southern Ontario’s Centre of Excellence for French Language and Bilingual Postsecondary Education. York’s campuses in Costa Rica and India offer students exceptional transnational learning opportunities and innovative programs. Together, we can make things right for our communities, our planet, and our future.