TORONTO, May 25, 2020 – Researchers have found a rare and massive collisional ring galaxy from some 10.8 billion years ago that is forming stars 50 times faster than the Milky Way, says York University Postdoctoral Fellow Leo Alcorn of the Faculty of Science.

These kinds of ring galaxies are formed when one galaxy collides with another galaxy that passes through its centre.

“The aftermath of the collision leaves behind a ring of diffuse light around the galaxy, a density wave of stellar material,” says Alcorn, a co-author on the paper, “A giant galaxy in the young Universe with a massive ring,” published today in Nature Astronomy. 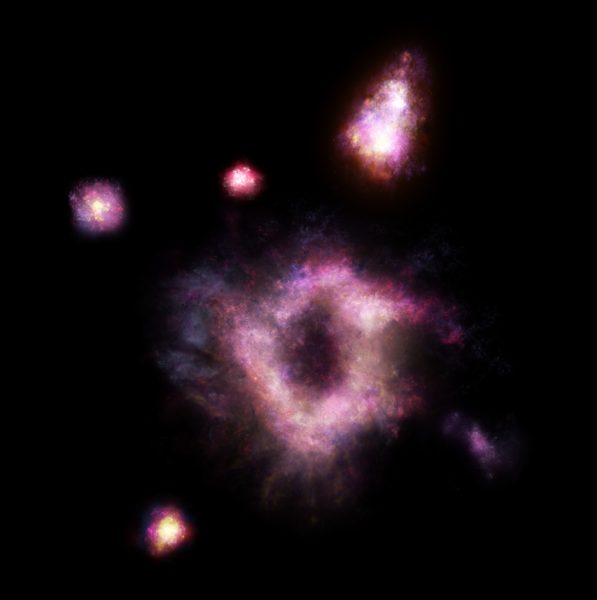 The discovery could shake up theories about the earliest formation of galactic structures and how they evolve.

Little is known about distant collisional rings, but with this finding the research team, led by researcher Tiantian Yuan of Australia’s ARC Centre of Excellence for All Sky Astrophysics in 3 Dimensions, can provide what it believes is the first detailed study of a ring galaxy from 10.8 billion years ago.

“It is a very curious object that we’ve never seen before,” says Yuan, who is based at the Centre for Astrophysics and Supercomputing at Swinburne University of Technology. “Most of that activity is taking place on its ring – so it truly is a ring of fire.”

She says the importance of this finding is it will allow researchers to study significantly more about merger-driven star formation and how disk galaxies evolve and interact with their environment, as well as with neighbouring galaxies.

This galaxy is similar in stellar mass to the Milky Way, but more than one and a half times larger in stellar half-light radius. It also has a clear ring structure and large diffuse disk, resembling a giant donut. It may be the most distant collisional ring confirmed to date. The closest thing to it in the local Universe is the well-known Cartwheel Galaxy, also a collisional ring galaxy.

The hole at its centre is three million times bigger than the diameter of the supermassive black hole in the galaxy Messier 87, which in 2019 became the first ever to be directly imaged.

The team worked with colleagues from Australia, the United States, Canada, Belgium and Denmark. Spectroscopic data was gathered by the WM Keck Observatory in Hawaii and images recorded by NASA’s Hubble Space Telescope to identify the unusual structure of the galaxy.