TORONTO, March 9, 2020 – When Central American families, men, women and children attempt to cross into the U.S., they’re faced with hardened U.S. immigration policies meant to stop unauthorized entry – even though many of these migrants are just desperate to flee violence and poverty in their homelands. 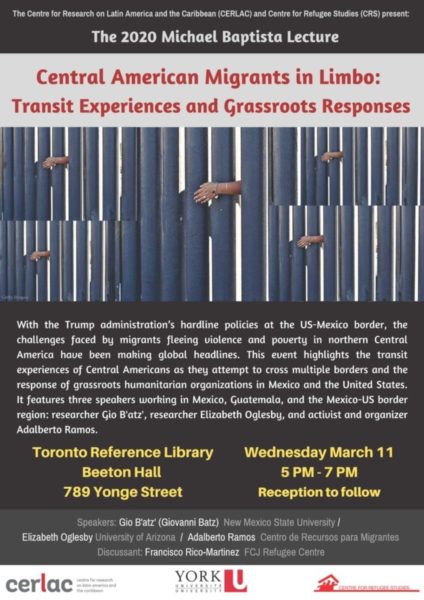 The transit experiences of migrants trying to cross the U.S.-Mexico border will be the focus of a lecture, Central American Migrants in Limbo: Transit Experiences and Grassroots Responses, hosted by York University’s Centre for Research on Latin America and the Caribbean (CERLAC), with assistance from the Centre for Refugee Studies (CRS). The Winter 2020 Michael Baptista Lecture will be held at the Toronto Reference Library on Wednesday, March 11.

“Large scale migration of Central American asylum seekers is one of the biggest humanitarian crises in the Americas today,” said Associate Professor Sean Rehaag at Osgoode Hall Law School, who serves as Director of CRS.

But does this impact Canadians? And what about those Canadians who feel removed from televised images of Central American migrants being taken into federal custody, and children separated from their families and housed in crowded U.S. border facilities? Canadians should care, said Rehaag.

“People are fleeing massive and sustained human rights violations, as well as serious economic hardship,” he said. “Unfortunately, the United States has responded to this humanitarian crisis through harsh border control measures and penalties imposed on asylum seekers,” said Rehaag. “The Canadian government has failed to call out repeated U.S. breaches of international refugee law.”

NOTE: Members of the media should RSVP to the contact below.