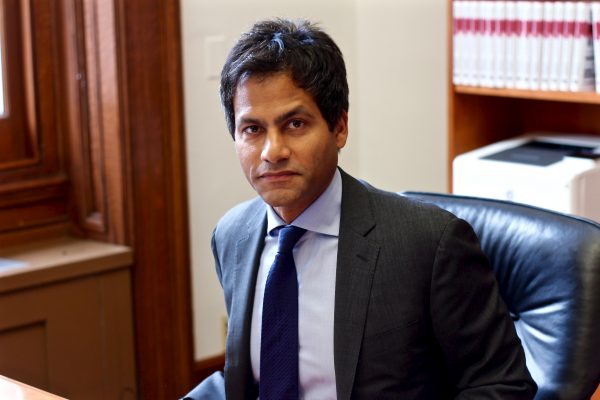 What we once called the “public square” is now controlled to a large extent by social media companies and other transnational private corporations which have an immense, if poorly understood, influence on who can speak, what can be said, and what speech gets heard, Jaffer contends. Because these corporations shape public discourse (and thereby shape our societies), we should recognize that research and journalism that focus on them is of special social value, he says.

The ‘Or ‘Emet Lecture is presented annually by Osgoode’s Jack & Mae Nathanson Centre on Transnational Human Rights, Crime and Security, with the assistance of the ‘Or ‘Emet Fund.  The Fund, which was established in 1976, seeks to promote through public discussion, research and scholarly writing, public and professional appreciation of the significance of religion, ethics, culture and history in the development of the legal system. ‘Or ‘Emet means the light of truth.

Jaffer previously served as deputy legal director at the American Civil Liberties Union, where he oversaw the organization’s work on free speech, privacy, technology, national security, and international human rights. He has argued civil liberties cases in multiple appeals courts as well as the U.S. Supreme Court and has testified many times before federal agencies and the U.S. Congress. While at the ACLU, he led or co-led litigation teams that compelled the Bush administration to disclose the “torture memos,” compelled the Obama administration to disclose the “drone memos,” and compelled the National Security Agency to abandon its dragnet surveillance of Americans’ call records. He also played a major part in the ACLU’s decision to take on the representation of Edward Snowden.

His recent writing has appeared in the New York Times, the Washington Post, the Los Angeles Times, the Guardian, and the Yale Law Journal Forum. He is an executive editor of Just Security, a national security blog, and his most recent book, The Drone Memos, was published by The New Press in the fall of 2016. He is a graduate of Williams College, Cambridge University, and Harvard Law School. Early in his legal career, he served as a law clerk to Hon. Amalya L. Kearse of the U.S. Court of Appeals for the Second Circuit, and then to Rt. Hon. Beverley McLachlin, Chief Justice of Canada.

About Osgoode Hall Law School
Osgoode Hall Law School of York University has a proud history of 129 years of leadership and innovation in legal education and legal scholarship. A total of about 900 students are enrolled in Osgoode’s three-year Juris Doctor (JD) Program as well as joint and combined programs. The school's Graduate Program in Law is also the largest in the country and one of the most highly regarded in North America. In addition, Osgoode Professional Development, which operates out of Osgoode’s facility in downtown Toronto, offers both degree and non-degree programming for Canadian and international lawyers, non-law professionals, firms and organizations. Osgoode has an internationally renowned faculty of 60 full-time professors, and more than 100 adjunct professors. Our respected community of more than 18,000 alumni are leaders in the legal profession and in many other fields in Canada and across the globe.

York University champions new ways of thinking that drive teaching and research excellence. Through cross-disciplinary programming, innovative course design, diverse experiential learning and a supportive community environment, our students receive the education they need to create big ideas that make an impact on the world. Located in Toronto, York is the third largest university in Canada, with a strong community of 53,000 students, 7,000 faculty and administrative staff, and more than 300,000 alumni.